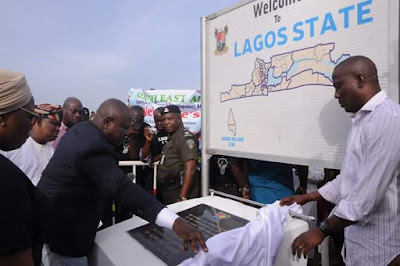 ...Says initiative will go round all parts of the state
...Senator Olamilekan, residents laud gov over developmental strides

Lagos State Governor, Mr. Akinwunmi Ambode on Tuesday evening commissioned the lighting up of the stretch of Lagos-Abeokuta expressway from Ile Zik to former Toll Gate, Sango Ota and Murtala Mohammed International Airport to Oshodi, just as he said the initiative was part of the promise of  building a 24/7 economy that will create employment and wealth for the people.

Governor Ambode, who commissioned the project amidst fanfare from elated residents, assured that his administration will ensure that no part of the state is left untouched in the Light Up Lagos Initiative.

The Governor recalled the recent connection of 68 Communities in Ibeju Lekki to national grid after over five years of being in total darkness, saying that the project was a special programme of his administration designed to achieve all-inclusive governance.

While reiterating that the Light Up Lagos Project is built on a tripod consisting the Light Up Lagos Power Advisory Committee, Community Electrification and the Street Lighting Initiative, Governor Ambode said the commissioning would provide adequate illumination on strategic highways in keeping with his vision to light up all major roads and border towns in the State.

He said: "It is very important to note that the Light Up Lagos Project goes beyond lighting up roads. As a State, we have keyed into the CHANGE mantra of the President Muhammadu Buhari-led government and have taken the project to Federal Roads. We have gotten the support of Federal Government agencies to take over federal roads, put new installations and retrofit existing installations that are not working.

"The Street Lights we are commissioning today are on Federal and State Roads. Other Federal Roads we have lit up include:
• Maryland to Mile 12 and
• Retrofitting of Third Mainland bridge
Some of the State Roads are:
• Agidingbi and Acme Roads in Ikeja
• Allen Avenue – Opebi Road
• Ekoro and Afa Nla Roads in Alimosho
and so many other roads too numerous to enlist here today,"  the Governor said.

He added that the project was an integral part of his programmes geared towards putting Lagos on the same pedestal and status as similar megalopolis in the world, adding that the initiative was also part of the security strategy to make Lagos competitive, safe and secure.

He said significant success had been recorded since the commencement of the project among which included an increase in commercial activity in the areas where project had been installed, while driving on major highways and streets in Ikeja, Alausa Central Business District, Third Mainland bridge, Iyana Oworo/Berger axis amongst others have become more pleasurable as a result of the improved illumination.

While assuring that the Gateway town of Seme in Badagry and other border towns will have their streets lit by September, Governor Ambode urged residents to take ownership of the project and report any suspicious activity around the facilities to security agencies.

He also urged communities, organizations and individuals to key into the initiative through the ‘Adopt A Street Light’ programme, where government will reciprocate with concessions in the payment of Land Use Charge as well as presentation of letters of commendation.

Earlier, Commissioner for Energy and Mineral Resources, Mr. Olawale Oluwo said most of the installations were connected to the existing Independent Power Plants (IPP) of the State, a development which he said had saved the state government significantly in costs of additional generating sets and fueling them.

He said the project had so far demonstrated that Lagos is the light at the end of the tunnel for Nigeria.

Also speaking, Senator representing Lagos West at the National Assembly, Adeola Solomon (Yayi) commended Governor Ambode for the various developmental projects in the state, especially in the Alimosho axis, saying the area has never had it so good since the advent of democratic rule in 1999.

On his part, the Executive Secretary of Agbado Oke-Odo Local Council Development Area (LCDA), Engr. David Famuyiwa said the commissioning of the project was an eloquent testimony to the fact that Governor Ambode is not only an action Governor in words, but also indeed, and that he was truly committed to make life better and meaningful for the people.
News