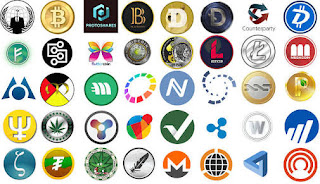 In the 21st century, money is no longer limited to bills, coins and credit cards. In fact, some money is truly international -- not owned by any particular government -- and regulated “by the people” instead of a central entity. It also exists wholly on the internet. This type of money is called cryptocurrency.

You may have heard of or even used Bitcoin when it first became popular several years ago, but where Bitcoin used to rule, other cryptocurrencies are now being used to pay back family members for lunch, charge customers for products and services and make other everyday transactions. As an entrepreneur, it’s important to keep an eye on the most commonly-used cryptocurrencies. Here are six I think you should know about.

Rather than competing with Bitcoin like many other cryptocurrencies, Ethereum complements it; while the Bitcoin blockchain network tracks ownership of its own currency, the Ethereum blockchain runs programming codes for its users’ applications. People use Ethereum to create custom (but
trustworthy) crowdfunding platforms, autonomous online organizations and even their owncryptocurrencies. Because these applications are decentralized, they can only be built in the Ethereum network.

Though Ether, the network's money, wasn’t made to be used for everyday payments, anything of value can be traded for products and services; as a result, many developers use it to pay for each other’s help in building applications.

However, most online stores that accept cryptocurrency do not take Ether.

If Bitcoin were gold, Litecoin would be silver. Litecoin works just like its more popular counterpart, but it’s worth a little less -- there are 21 million total Bitcoin in existence and 84 million Litecoin. Litecoin are easier to mine and quicker to move from person to person due to its faster block generation. It is perhaps the least intimidating cryptocurrency for those who are new to exchanging money online: Litecoin’s wallet can be downloaded from the official Litecoin website, and it’s fully encrypted to prevent accidental spending and computer viruses. This is a super simple network for those who need to move smaller amounts of money fast.

While other cryptocurrencies avoid banks, Ripple embraces them. In fact, Ripple was made for banks, as it allows them to make faster, low-cost, on-demand global payments of any size. Traditional cross-border transactions require banks to go through an intermediary (or often several), which delays completion. Ripple offers a faster and more direct alternative. When a bank customer in the US wants to send a payment to a different bank customer in China, for example, Ripple immediately queries both banks for their transaction fees and makes the transfer in a matter of minutes. It even updates both customers’ ledgers right away so they can view their balances following the transaction. This unique cryptocurrency enables banks to offer new and improved payment products, and it simplifies regular transactions for consumers around the world.

Though Dash can be used for transactions between consumers, it was made for shopping. Think of Dash as a replacement for PayPal. Many merchants accept Dash just as they do USD, but the transaction is faster -- you don’t have to wait a day or two to see the payment charge to your account. Like any other cryptocurrency, you can buy Dash using government-regulated currency and keep it in a designated Dash wallet until you’re ready to spend it at a compatible merchant. You may even consider adding your own business to the merchant map!

If you want to maximize your confidentiality, this cryptocurrency is for you.  Zcash has been dubbed the first “zero-knowledge” cryptocurrency with its ability to “shield” the identities of all senders, recipients and values. Each transaction is fully encrypted, so users can enjoy the advantages of a public blockchain without offering up private information. Many view Zcash as a more confidential version of Bitcoin.

Monero is another excellent cryptocurrency option for those concerned about their privacy. This currency was designed to give individual users full control over their money; with Monero, you are your own bank. Transactions are “selectively transparent,” meaning you decide who can and can’t see where your money is going. Crises faced by banks and governments won’t affect your assets or compromise confidential information. Finally, like many cryptocurrencies, Monero is decentralized and community-built -- over thirty developers have directly contributed to Monero so far.

Why are these so important?

If your business doesn’t use any of these cryptocurrencies already, you may want to start incorporating them soon. When it comes to online financial transactions, cryptocurrencies like the ones above have quickly started to give PayPal, Stripe and other payment systems a run for their money.

Also E-dinarcoin is one of the upcoming promising Cryptocurrency. You can do your research and look into E-dinarcoin.

Cryptocurrency transactions aren’t validated by a central entity, meaning there are no bank or platform fees associated with payments -- just optional, minute fees (one percent or less) that speed up the transaction. You also don’t have to wait nearly as long to receive cryptocurrency as you may with traditional money.

Again, a cryptocurrency's most important feature might be that it's truly international; no particular government owns or regulates it. This means there are no fees for payments that cross borders, and the transaction works the same no matter where you or the other party are located.

The only major disadvantage to some cryptocurrency is the need to sell it for USD (or any other government currency). However, this process closely imitates the way you’d transfer PayPal funds to your checking account.