Rescue of School Girls: We have the capacity to fight crime- Ambode 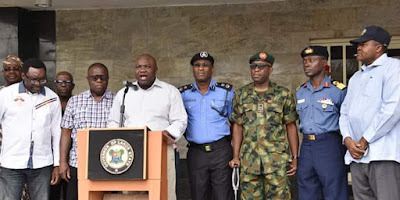 …Salutes Efforts of Security Agencies
…Girls Were Not Molested; No Ransom Paid- CP
…How We Planned the Operation- Key Suspect

Lagos State Governor, Mr. Akinwunmi Ambode on Sunday said his administration has the will and capacity to fight all forms of crime and criminality in the state, just as he read the riot act to persons who have taken to kidnapping, warning that there would be no hiding place for such act.

The governor, who addressed journalists on the safe rescue of the three girls abducted by gunmen from the Babington Macaulay Junior Seminary School in Ikorodu last Monday, warned that the state government will spare nothing to clamp down on all forms of crime in the state.

“Let me warn that the State Government will not tolerate kidnapping or any forms of crime in the State. Our position is clear and unambiguous, Lagos state has the capacity and the will to go after every form of crime and criminality in order to safeguard lives and property in the state. 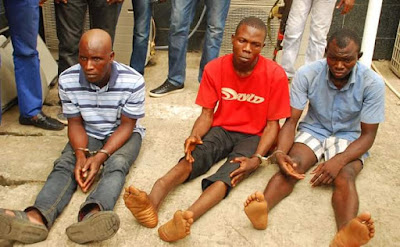 “The Lagos State police Command, the Department of State Security and members of the Armed forces worked tirelessly round the clock in the last six days to secure the release of the children. I thank them for a good job.

“The three girls have been safely re-united with their families and the Government wishes to assure Lagosians that their security is top priority and it will not relent in ensuring that Lagos remains safe and secure,” he said.

Governor Ambode said one of the suspected kidnappers – one Emmanuel Arigidi, was arrested during the operation by security operatives to release the abducted children.

“As our daughters are re-united with their mothers and other members of their families, I would like to seize this opportunity to wish all mothers in Lagos State and Nigeria at large a happy Mothers' Day,” he said.

Also, the State Commissioner of Police, Mr. Fatai Owoseni said three suspects were arrested in the operation that led to the rescue of the girls, adding that one of the suspects (Emmanuel) was actively involved, while two others – Seun Akanji and one Henry were conspirators who aided the kidnapping one way or the other.

Owoseni disclosed that the girls were rescued around Imota in Ikorodu, but declined to disclose further details in order not to jeopardize ongoing investigation.

He said: “With respect to the state of the girls, they are very well and they are stable. I can confirm that immediate medical attention just to test them up has been given to them by the police medical team and I can as well tell you that as we picked them up, one of the questions we asked the girls was whether they were molested in any way and the three of them stated unequivocally that they were not molested in any way.”

When asked if ransom was paid, Owoseni said nothing of such happened as police deployed intelligence-led policing using the platform of technology and partnering with members of the community to put pressures on the kidnappers to secure the release of the girls.

He added: “When you talk about ransom in cases like this, you are glorifying kidnapping. We should not be talking about ransom anymore in this country because if you do, you are telling others that kidnapping is viable and you can be going and kidnapping people to collect money.

“But I want to also say that what was employed in rescuing the girls is more of application of intelligence-led policing using the platform of technology, partnering with members of the community and pressures on the kidnappers because what we have done with other security agencies is that we also went for members of their families including their mothers, their fathers, their children and with that pressure they found out that there was no way again for them to keep on keeping the girls and that was what led to the success we recorded in rescuing the girls,” the CP explained.

He assured residents that Lagos remains safe and secured saying that the state government and security agencies have the capacity to pursue any criminal who dare at all to come and disturb the peace or to commit crime in the state.

When interviewed by journalists, the prime suspect, Emmanuel Arigidi said twelve people were involved in the operation and that the operation was planned at Majidun area of Ikorodu.
He said: “We went to Maya bridge to enter Canoe and went to the school around 8pm. After we gained entrance into the school, we took away three girls and we took them to our hideout. But along the line, we had disagreement between ourselves and I was actually the one that started it. I told other members of the gang that what we have done is not good and that I don’t like it.

“I know that security in Lagos State is now tight and I was telling others that there was no way we would get away with this kind of job considering the level of security in the state. When I told them that we should end the assignment, other members of the gang threatened to kill me and then I took Canoe to run away.

“Three days after I ran away, operatives of the Special Anti-Robbery Squad (SARS) then arrested me somewhere in Majidun and that was how I told them how we planned the attack. One thing I will like to say is that if not for the fact that I was arrested, they would not have seen the girls because I was the one that revealed everything to the police,” he narrated.
Lagos State Government News