Be Champions of Our Continuity with Improvement Mantra, Ambode Charges New Perm Secs 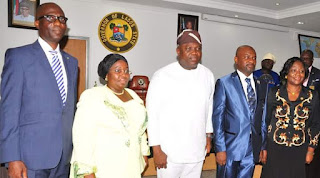 …Reiterates Commitment To Continually Reinvigorate Public Service
Lagos State Governor, Mr. Akinwunmi Ambode on Monday swore-in two newly appointed Permanent Secretaries into the State Civil Service with a charge on the appointees to be champions of his administration’s continuity with improvement mantra.
The Governor who spoke at the Executive Council Chambers of the Lagos House, Ikeja, said Permanent Secretaries, as drivers of various government ministries and agencies are important to him, and as such, his administration would always appoint only the very best.

The Governor, who described the appointment as a testament of his commitment to continually reinvigorate the machinery of government through elevation of worthy and qualified personnel from the pool of skilled human capital available in the State Public Service, said the appointees must hit the ground running and not hesitate to take tough decisions.

While reminding the appointees to see that they now occupy very important positions, Governor Ambode said a lot is expected from them adding that they must be ready to show leadership as people are eagerly waiting to see the direct and indirect impact of government policies and programmes, which they must drive.

He said: “Leadership at any level of human organization, especially at this challenging time, requires innovation, creativity and resource management. Our new appointees are therefore enjoined to immediately hit the ground running as our people are eager to see the direct and indirect impact of government policies and programmes.

“Let me state that our civil and public servants are agents of change and enablers of government policies. The Permanent Secretaries are therefore the mirror which reflects the quality of service our civil servants are offering.

“As I congratulate our newly sworn-in Permanent Secretaries on your well deserved appointments, I urge you to live up to the dictate of your new status as the appointment was based on your outstanding trajectories which were found to be in line with the skills and competency required to drive Lagos State,” Governor Ambode said.

The Governor also congratulated civil servants in the State, saying there has been remarkable improvement in their service delivery since his administration came on board.
The newly appointed Permanent Secretaries are Dr. Olayiwole Shakirudeen Onasanya and Mr. Olumide Abayomi Lawal.

Responding on behalf of the appointees, Lawal thanked Governor Ambode for the confidence reposed in them and pledged their unalloyed support to the programmes and policies of the current administration.

He said: “We are determined to join the fast moving train which the Governor has put in place and we shall not disappoint.”
Lagos State News