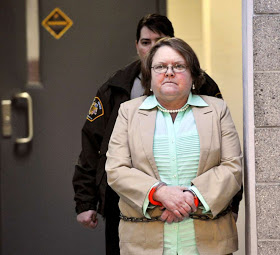 An Alabama woman convicted of capital murder in the running death of her 9-year-old granddaughter died Friday less than a year into her life-without-parole sentence for the killing.
Joyce Hardin Garrard, 50, died five days after being stricken at the state's women's prison, prison spokesman Bob Horton said.
The cause of death wasn't immediately available, but defense attorney Dani Bone said Garrard apparently suffered a heart attack Sunday minutes after visiting relatives at the state women's prison. She was taken from the prison by helicopter ambulance to a Montgomery hospital where she was placed on life support and eventually died.

"This is another loss for a family that already has lost so much," Bone said.

Last year, an Etowah County jury convicted Garrard of killing 9-year-old Savannah Hardin by making her run as punishment
for a lie about eating candy in 2012. Evidence during the trial showed that girl ran for hours outside Garrard's home in rural northeastern Alabama.

Garrard testified that she never meant to harm the girl but stayed outside running and picking up sticks with the child as they talked about the importance of telling the truth. Garrard also claimed she was coaching the girl in how to run faster in school races.

But jurors convicted her of capital murder, siding with prosecutors who called the woman the "drill sergeant from hell" and described the child's death as agony imposed by a woman she loved and trusted.
"She was tortured," prosecutor Carol Griffith told jurors in closing arguments.
The child's stepmother, Jessica Mae Hardin, is set for trial in June on a murder charge for allegedly failing to stop the punishment. Hardin, who is free on bond, has pleaded not guilty.