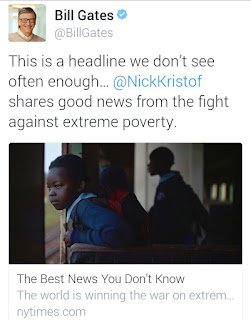 The world is a mess, with billions of people locked in inescapable cycles of war, famine and poverty, with more children than ever perishing from hunger, disease and violence.

That’s about the only thing Americans agree on; we’re polarized about all else. But several polls have found that about 9 out of 10 Americans believe that global poverty has worsened or stayed the same over the last 20 years.

Fortunately, the one point Americans agree on is dead wrong.

As world leaders gather for the United Nations General Assembly this week, all the evidence suggests that we are at an inflection point for the ages. The number of people living in extreme poverty ($1.90 per person per day) has tumbled by half in two decades, and the number of small children dying has dropped by a similar proportion — that’s six million lives a year saved by vaccines, breast-feeding promotion, pneumonia medicine and diarrhea treatments!

Historians may conclude that the most important thing going on in the world in the early 21st century was a stunning decline in human suffering.

O.K., you’re thinking that I’ve finally cracked up after spending too much time in desperate places. So a few data points:

■ As recently as 1981, when I was finishing college, 44 percent of the world’s population lived in extreme poverty, according to the World Bank. Now the share is believed to be less than 10 percent and falling. “This is the best story in the world today,” says Jim Yong Kim, the president of the World Bank.

■ For the entire history of the human species until the 1960s, a majority of adults were illiterate. Now 85 percent of adults worldwide are literate and the share is rising.

■ Although inequality has risen in America, the global trend is more encouraging: Internationally, inequality is on the decline because of gains by the poor in places like China and India.

The U.N. aims to eradicate extreme poverty by 2030, and experts believe it is possible to get quite close. In short, on our watch, we have a decent chance of virtually wiping out ills that have plagued humanity for thousands of generations, from illiteracy to the most devastating kind of hand-to-mouth poverty.

Yet the public thinks the opposite, that poverty is getting worse. A poll to be released Thursday by Motivaction, a Dutch firm, finds that only 1 percent of Americans surveyed realized that global extreme poverty had fallen by half over 20 years.

I wonder if those of us in journalism and the humanitarian worlds don’t err by focusing so much on human misery that we leave the public with the misperception that everything is always getting worse.

I’ve covered massacres in South Sudan, concentration camps in Myanmar and widespread stunting in India, but it’s also important to acknowledge the backdrop of global progress. Otherwise, the public may perceive poverty as hopeless and see no point in carrying on the fight — at just the point when we’re making the most rapid gains ever recorded.

When I first made the acquaintance of the developing world, as a backpacking law student in the 1980s, sometimes riding on tops of trains or buses and writing articles to pay my expenses, the most gut-wrenching aspect of poverty I encountered was ubiquitous blind beggars, robbed of dignity and any chance to be productive.

This is much less common today, partly because humanitarian aid — despite real shortcomings — has made a profound difference in health. The heroic work of former President Jimmy Carter and pharmaceutical donations from Merck have made river blindness less common. Vitamin A capsules costing 2 cents a dose have reduced blindness as well. Antibiotics have helped curb blinding trachoma. And a simple $25 surgery developed by a Nepali ophthalmologist, Dr. Sanduk Ruit, lets people suffering from cataracts see again.

The scenes of blind beggars on every street corner will soon be gone forever.

Cynics scoff that if more children’s lives are saved, they will just grow up to have more babies and cause new famines and cycles of poverty. Not so! In fact, when parents are assured that their children will survive, they choose to have fewer of them. As girls are educated and contraception becomes available, birthrates tumble — just as they did in the West. Indian women now average just 2.4 births, Indonesian women 2.5, and Mexican women just 2.2.

So in a moment we can return to urgent needs worldwide, from war to climate change to refugees. But first, let’s pause for a nanosecond of silence to acknowledge the greatest gains in human well-being in the history of our species — not to inspire complacency, but rather to spur our efforts to accelerate what may be the most important trend in the world today.

Sourced- The New Your Times
News