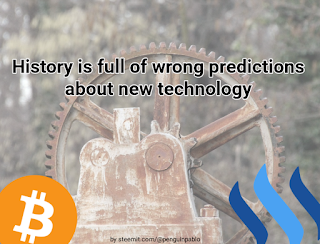 Since most of us don't have a crystal ball, predicting the future is not always easy. Especially when it comes to predictions about technological progress, adoption rates, or market potential. How about Bitcoin or blockchain technology? Is it a major innovation or just a buzzword? Let's look at some predictions from history first...

1.
"I think there is a world market for maybe five computers." ~ Thomas Watson, president of IBM, 1943
1943 is a long time ago and to be fair, when IBM's president Thomas Watson said "computer" he actually meant a a huge machine as big as a house. He was right in his prediction that few people ever wanted such a machine, but who could ever predict that we would wear a computer in our pocket as we do today.

2.
"There is no reason anyone would want a computer in their home." ~ Ken Olson, president, chairman and founder of Digital Equipment Corp., 1977
Years later, in 1977, there were still people around in the computer business that didn't believe people would ever use a computer at home.

3.
"Two years from now, spam will be solved." ~ Bill Gates, founder of Microsoft, 2004
Bill Gates predicted the end of SPAM emails within two years during the World Economic Forum in Switzerland in 2004. Unfortunately, the spam problem only increased in the years after his prediction.

4.
"Apple is already dead." ~ Nathan Myhrvold, former Microsoft CTO, 1997
When Microsoft CTO Nathan Myhrvold made this comment back in 1997 most people in the computer business didn't believe in Apple's future. And here we are, one decade later. Who could have predicted that Apple would overtake half of the world with a smart phone?

6.
"This 'telephone' has too many shortcomings to be seriously considered as a means of communication. The device is inherently of no value to us." ~ Western Union internal memo, 1876.
"The Americans have need of the telephone, but we do not. We have plenty of messenger boys." ~ Sir William Preece, chief engineer of the British Post Office, 1876.
Graham Bell had just presented his telephone in 1876 when the chief engineer of the British Post Office told him there was no need for such a device in his country. They had plenty of messenger boys after all... Well, apparently not enough. 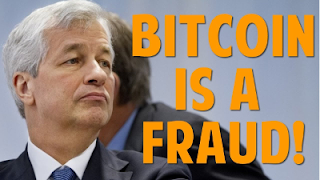 Bitcoin a fraud? The future knows Jamie Dimon is wrong.

Bitcoin is not a fraud. Bitcoin is transparant, it is decentralized, it is free from government interference and manipulation. There is no Federal Reserve System to print more money out of thin air to an unlimited supply. Anyone in the world can use it without signing up somewhere. It is fully open source. Payments are very cheap and international without any exchange rates or extra charges. Anyone can start accepting Bitcoin payments without investing anything or setting up a merchant account or something. It's money reinvented. Digital gold. How can this be a scam or a fraud?

Some people are afraid of technical innovation. Like a horse company 100 years ago: "Cars are dangerous and steal the jobs of horse wagon drivers". Or the British Post Office in 1876. Or the cinemas in 1946. But history proves that technical innovation always wins.

Bitcoin quotes / predictions
Rick Falkvinge, Founder of the Swedish Pirate party
“Bitcoin will do to banks what email did to the postal industry.”

Tyler Winklevoss, co-creator of Facebook
“We have elected to put our money and faith in a mathematical framework that is free of politics and human error.”

John McAfee, Founder of McAfee
“You can’t stop things like Bitcoin. It will be everywhere and the world will have to readjust.”

The future is here. We live in a freaking exciting time!