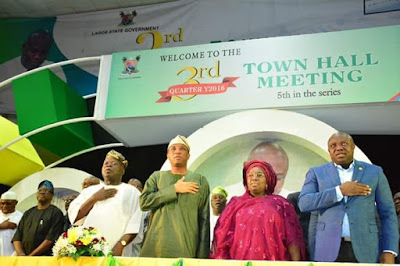 Lagos State Governor, Mr. Akinwunmi Ambode on Tuesday disclosed plans to recruit at least 5,000 Neighbourhood Watchers to boost security across the State, with new recruits expected to earn at least N25, 000 monthly with other allowances.

Governor Ambode, who spoke at the 3rd Quarter 2016 Town Hall Meeting, held at the Indoor Sports Hall, Teslim Balogun Stadium, Surulere, said the neighbourhood Safety Agency Bill which he signed into Law on August 15, 2016, was part of efforts to institutionalise and deepen community policing in the State.


“There is a law that has just been passed which is the Lagos State Neighborhood Safety Corps Law, 2016 and in line with the resolution taken by the House of Assembly yesterday, we would go all out to make sure that this agency is activated and all our neighborhoods will be covered, and then centralize with the State Government with all the necessary equipment and resources to ensure that we establish what we call community policing and that is the way to go.
“We will rebrand Neighborhood Watchers and re-equip them to the level that each Neighborhood Watchers in all the Local Governments will have their vehicles and necessary equipment to complement security. We are also working on employing additional 5,000 Neighborhood Watchers in all our Local Governments and they will be paid by us, while the basic salary for the entrance level will be N25, 000 per month,” the Governor said.

The Governor also disclosed that the State Government would roll out all its empowerment programmes next week.

He said the programmes targeted to assist youths, artisans and the needy become self reliant have been provided, hence beneficiaries would start getting support from the last quarter of the year.

“We will roll out all our empowerment programmes immediately to assist all our youth, artisans and the needy. The funding for the N500m Lagos State Persons Living with Disability Fund has been provided and beneficiaries will start getting support from this quarter,” Governor Ambode said.

He said a total of N166.8billion has been spent on capital projects this year, a figure, he said, was more than double the N53.6billion spent for the same period last year.

Governor Ambode said the State generated a total revenue of N97.3billion in the last quarter with an expenditure of expenditure of N110.2billion, noting that the cash reserve of the State has remained positive.

The Governor also disclosed that a total sum of N55billion was expended on capital expenditure in the last quarter.

According to him, the last quarter witnessed a lot of activities from the delivery of massive road infrastructure across the Local Governments in the State as well as the promulgation of the anti-Land Grabbing Law, aimed at making life easier for property owners and a boost in investment activities that will enhance the growth and development potentials in the State.

He expressed optimism that despite the recession, the State’s economy would remain on a strong and sound footing if capital expenditure spending is increased.

“In this quarter, we will concentrate more resources on capital projects. We will put money in the hands of our local contractors and through them stimulate and reflate the economy. Immediate payments will be made to contractors handling health sector and education sector projects within the next two weeks,” Governor Ambode assured.

Speaking on some projects outlined for the next quarter, the Governor said that plans have been concluded to transform the Yaba Bus Park with the provision of modern bus shelters replica of the ones erected at the Tafawa Balewa Square.

Governor Ambode also assured that the road rehabilitation projects ongoing at Adetola Street and Brown Road in Aguda, Surulere as well as Olajuwon and Biney Streets in Yaba would be completed before the end of the present quarter.

He said with the completion and delivery of the first phase of the 114 local government roads last month, the process of bid invitation for the construction of additional 114 roads across the 20 Local Governments and 37 Local Council Development Areas would commence within the next three weeks.

“We have commenced a multi-faceted development that will change the face of Lagos Island. We have installed new bus shelters at Tafawa Balewa Square and before the end of December, various projects will be commenced within the National Museum axis, Onikan to Tafawa Balewa Square, and from Lagos House Marina and Freedom Park. By the time we complete these projects, Lagos will become a major tourist destination in West Africa,” the Governor said.

Also speaking during the interactive session at the event witnessed by captains of industries, party chieftains and members of the diplomatic corps, Oba of Lagos, HRM Oba Rilwan Akiolu, lamented the suspension of a bill seeking special status for Lagos by the Senate, but expressed optimism that the bill would still become law in the nearest future.

He said: "The suspension of the bill sponsored by our amiable daughter and wife, Senator Oluremi Tinubu is unfortunate but it is better and advisable to let these people know that this is not a matter of quarrel but a question of time. It will definitely happen."

The monarch, who recalled the history of the agitation for special status for Lagos, urged the promoters of the bill to go back to drawing board and do their home work well before representing it for consideration and passage.

The Governor, who also spoke on the issue, commended Senator Tinubu for her courage to push for the bill, while also lauding the Senate President, Bukola Saraki for his magnanimity in allowing the bill to be presented on the floor of the Senate.

He however expressed optimism that the bill would be reactivated and represented again, saying that the success of the bill was in the overriding interest of Nigerians.
Lagos State Government News