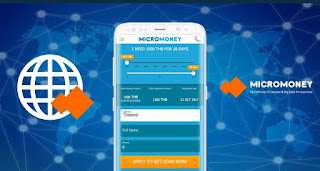 100 out of 196 countries in the world serve as a home for 2,000,000,000 unbanked people, who use cash only, do not have any credit history and do not have access to any financial services. It is essential to note that most of these people use their smartphones and social networks on a regular basis . This is a tremendous amount of a new data and a substantial number of new potential clients. Financial institutions do not have any information about these clients and their creditworthiness, thus they do not want to take a risk to serve these people. However, these people still need funds and surely businesses still need new customers to survive a competition!
We are here to help these 2 billion unbanked people to explore The New Global Crypto Economy!

Micromoney is a team of professionals who have a capacity to work in the emerging markets where all established banks are not able to operate, and even if they do decide to be there, they are not innovative enough to survive in this environment.

Our Solution:
MicroMoney is an Open Source Credit & Big Data Bureau that connects new customers to all existing financial services. MicroMoney A.I. platform uses complex algorithms to predict creditworthiness of all customers and in just 15 minutes a borrower can get their very first loan in his/her life just from their smartphone. All customers have an ability to pay less interest and have a higher credit rating, if they use our platform more often . All aggregated Big Data and Credit Histories are stored on the Blockchain. Thousands of existing businesses will get access to millions of new customers which we will bring to the global economy. 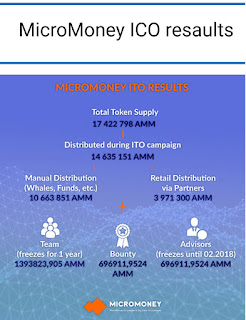 MicroMoney Distributes Over 10 Million Tokens, Raises Soft Cap to $10 million During Worldwide Token Distribution Campaign MicroMoney Intl, the social lending blockchain firm with aim to help billions of the “unbanked” around the globe, has sold more than 10 million $AMM tokens during its distribution campaign.
MicroMoney reports 10,663,851 tokens distributed since $AMM token was first available to contributors in October during the pre-distribution phase. In addition, the company has raised the soft cap up to $10 million, which was initially set for $1 million. Retail buyers now have in hands 3 971 300 AMM tokens. 852 350 went to Ambisafe, KICK-ico had 114 999, ICO-promo took 2 173 951. ICO- box gained 830 000 AMM tokens. Via distribution stage (17th of the October- 18th of the November, 2017) was sold 4 491 456 AMM tokens. 3 062 500 MicroMoney’s tokens were bought in fiat. 1 428 956 were purchased for cryptocurrency.

During pre-distribution stage (15th of the September- 16th of the October, 2017) 6 172 395 AMM tokens was contributed. 2 128 844 in fiat, 4 043 551 in cryptocurrency. “We have been running an amazing campaign on our site. The activity of contributors shows that they believe in our transparent blockchain business with goals to help eliminate poverty through financial inclusion. 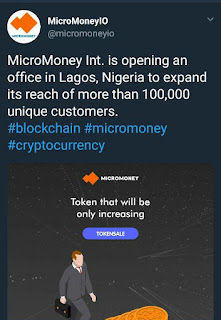 Once approved, loans go to borrowers’ e-wallet for disbursement. MicroMoney plans to use attracted funds to further expand to Vietnam, Malaysia, Singapore and Nigeria and include over a million of previously unbanked customers into the global financial system. About MicroMoney Founded in 2015, MicroMoney International (MicroMoney.io) is a global fintech company offering financial services for the unbanked individuals in the emerging markets and access to the unbanked audience for banks, trade, and financial organizations. MicroMoney is a fast-growing company valued at $1.85 million, with over 85 employees in six locations around the globe.