A History of the Forest Kingdom of Benin. 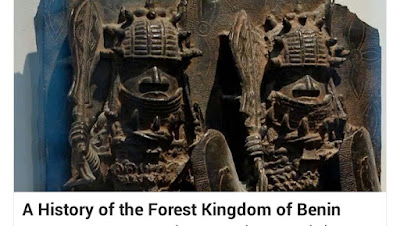 With artwork to rival that of renaissance Italy, structures comparable to the Great Wall of China, and a ruthlessly disciplined army, the Forest Kingdom of Benin is one of the highlights in Africa’s great history.

It derives its name from the lush rainforests in which the Edo people first settled in the 900s. The people called their kingdom the igodomigodo and the head went by the name of Ogiso, the ‘ruler of the sky’. This dynasty of rulers came to an end in the 1100s, and the
Edo people feared a collapse of their community. Hence they called upon their neighbour, the King of Ife, to come to their rescue. This king sent his son, Prince Oranmiyan to bring order to the igodomigodo. His son, Eweka, then became the first in a long line of Obas to rule the kingdom of Benin.

Ewuare the Great became one of these very Obas in the 1440s. He was revered by his subjects for overseeing the Benin empire’s golden age and showing great courage in battle. He was so respected that one could not look at him without permission, and he was able to summon an army of 20 000 men in one day, which could rise to 180 000 if he so wished.

He turned Benin into a city state, which became the heart of his kingdom. Here he continued the construction of the famous Benin walls. At its peak, this construction was over 9,900 miles long, making it one of the largest man-made structures at the time, rivalling the Great Wall of China, and consuming more materials than the Egyptian pyramids.

Art also flourished during Ewuare’s reign. The Benin empire was renowned for its terracotta, brass, and bronze sculptures, which depicted important events in the kingdom’s history, such as famous victories over their enemies and the arrival of the Dutch and Portuguese.

They would often use the lost wax method for their artwork. This involved making a precise model of a sculpture out of wax, which was then covered in clay. When these two materials were heated, the wax would melt away, leaving a hardened clay mould. Artists would then pour molten metal into the mould, before breaking it up to leave a magnificent brass or bronze sculpture.

This art attracted the attention and awe of the European travellers who came to visit and trade with the Benin empire. So did the Oba’s grand palace. One Dutch visitor returned to Holland to boast of its enormous size, covering an area of land larger than two American football pitches put together, and covered with beautiful artwork.