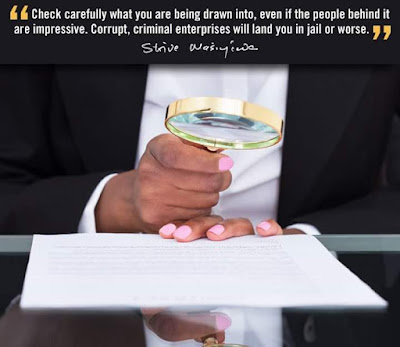 If a business opportunity looks too good to be true, it could be much worse than that!

A friend of mine in South Africa who is into "BEE deals" (as they call them over there, stands for Black Economic Empowerment), called me one morning, very excited:  "I have these American guys who want to sell us a company in one of the Caribbean Islands. It's a financial services business. It makes a lot of money. Can I bring them to see you?"

He's a dear friend so I acquiesced to his request. The Americans were smooth, sophisticated guys from Texas who made a
very impressive pitch. These were days before things like PayPal and Mobile Money transfers.

After the pitch, I asked them if we could see some financials. We signed the customary Non-Disclosure Agreements and we were given the papers, including the presentations. I promised a quick response. They wanted African partners to roll out in South Africa, and the rest of Africa.

“We need a strong BEE partner, and you guys at Econet can also take us into Africa," was the parting shot.

That evening I sat down to look at their financials. It was a remarkably profitable business!

I quickly called one of my top financial advisors, Ayo Adeboye, and gave him this directive:

A few hours later, Ayo walked in with a big shake of his head.

"How did you know, because it is not easy to see, based on their presentation?"

The following day, I called my friend and told him that the business these guys were involved in was an immoral and criminal enterprise. He was initially very upset... with me!

I also told him that it was a totally immoral enterprise, whose victims included children, and these guys knew they were facilitating such activities.

The lure to make an extraordinary amount of money was very strong, and I could see that the temptation was there for my friend, to try and justify himself. I don't know what became of it, and I never discussed it again with him. I just know he did the right thing, and quietly walked away from the "deal of a life time"...

There is no such thing! The "financial service” they were offering was a special pre-paid debit card which allowed people to buy pornographic materials on the Internet without their name being traced.

There are businesses out there that you will know at once are criminal enterprises. They always come with a promise of easy money, or unusually large profit margins.

"Hey. Be careful out there…"  (Line from a popular TV series).

Check very carefully what you're being drawn into, even if the people behind it are impressive. Corrupt, criminal enterprises will land you in jail or worse.