The Third Most Important Skill in Business (Part 1). By Dr Strive Masiyiwa 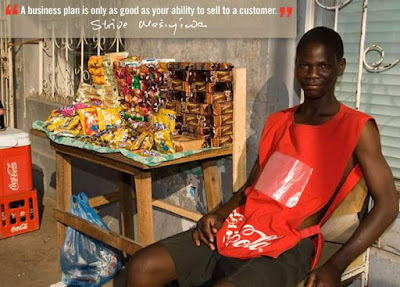 This is a huge topic and one of my favorites: Every entrepreneur must be a good salesperson.  You must never stop selling, even if you're the richest man in the world.

I remember listening to Bill Gates one day talking passionately about one of the products from Microsoft.  I thought to
myself, "Wow, he is the richest man in the world, but he’s still interested in selling his products!"

And it's not just Bill Gates.

__Every great entrepreneur has this skill: the ability to sell.

When I was about eight years old, my mother gave me a packet of sweets to take to school. I sold the sweets one by one over the lunch break! After that, I bought my own sweets and sold them to my friends using my profits. Before long I had a little business.

But it almost became a disaster when I took to the streets and got lost, whilst trying to sell my sweets. Then my mother intervened! She stopped me selling sweets on the street and channeled my energy into more creative things, and helped me sell them from her shop.  She did not kill my entrepreneurial zeal.

There are a lot of people who dream of getting into business, but they think it’s beneath them to be seen trying to sell something.

__Never look down on a street vendor, because from their ranks will come more great entrepreneurs than from most business schools!

Whatever it is you're trying to do, whether it's a product or a service, you must know how to sell. There are millions of people who work for organizations, even in very senior management positions, who could not even sell an alcoholic beverage to an alcoholic. This is bad.

The ability to sell is a skill you need, beyond selling something to a customer.  It includes "making a proper pitch" to investors and bankers. It also includes "selling your vision" to potential and current employers, and partners.

__It's all about the ability to sell!

Let me close by saying this: Some of the greatest salespeople I've ever known are Americans. I have such admiration for the practice of sales and marketing in the United States.

Imagine for a moment the guy who invented Coca-Cola... How on earth did he persuade people they could overcome thirst by drinking a "black" liquid?! I imagine people would have recoiled at the idea of drinking something that looked dirty, and there were no fridges in those days.

From now on, I want you to think consciously about how a product or service is being sold!

One last thing:  It doesn’t matter how good you are in sales, if the product or service is bad, you will not last. Let's talk about how you can become the greatest salesperson, even to the point of selling ice to Eskimos!