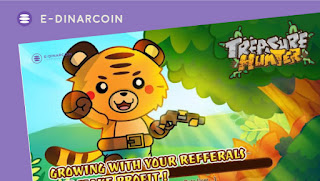 The E-Dinar Coin cryptocurrency potential is highly appreciated not only by financial analysts, but also by users themselves, as evidenced by the increasing number of entrepreneurs accepting the EDC as a method of payment. For example, in Indonesia for the E-Dinar Coin cryptocurrency, you can not only drink coffee or have lunch, but pay for travel, buy vegetables and fruits, pay a loan for a motorcycle or a car. This alternative monetary unit is in great demand among the local population. Not surprisingly, the first game in which you can earn EDC using your smartphone appeared in this country. And cryptocurrency users hasten to take advantage of such an excellent opportunity to win EDC.

If you have not heard about this game, then below you can see its promo video. The “Treasure Hunter E-dinar” game is designed in the genre of well-known “Mario”, but the main character of the game is a tiger who, like Mario, will beat the chests, thereby mining E-Dinar Coin. It can be easily downloaded from Google Play and installed on mobile devices without any problems. The release of the game version for the iPhone is scheduled for July. The game is available to users around the world.

Now you can download the game from Google Play Store