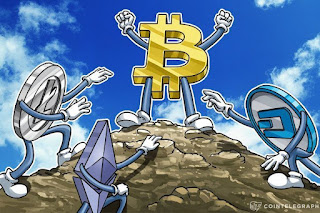 While sources differ on the number of millionaires in the world, Credit Suisse estimates the number at about 35 million. This figure accounts for all “financial and nonfinancial wealth,” including assets, collectibles, and homes.

This is a remarkable number when compared to the total number of Bitcoins that will ever exist. While there are roughly 35 million millionaires in the world, there will only ever be a maximum of 21 million Bitcoins.

That’s right--there will never be enough Bitcoins in existence for every millionaire in the world to own even a single one.
Why is Bitcoin valuable?

While you let that thought sink in, let’s consider what gives Bitcoin its value. Granted that there are numerous features we could cite, including a global network, an immutable Blockchain and a means to transfer wealth from one person to another without ever involving a middleman.

These are all fine features, to be sure. But what really makes Bitcoin valuable are two properties: scarcity and authenticity.
Digital scarcity
Bitcoin has value for the same reason gold has value: people want it and there isn’t enough to go around. New gold can’t merely be created; one has to find a gold mine and go through the difficult, capital-intensive and expensive process of mining and refining the gold. Because neither governments nor factories can create more of it, gold is scarce. This scarcity imparts value.

Many unusual items have been used as currencies or stores of value in earlier societies. One of the more famous is wampum, a necklace made from a certain kind of seashell that was rare in the Americas. A currency doesn’t necessarily have to be inherently useful in order to function, but it absolutely must be scarce.
This requirement for scarcity is the reason counterfeiting has such severe penalties. In fact, in earlier times, counterfeiting was punishable by death. Counterfeiters undermined confidence in a currency by making it less scarce. Doing so, at scale, could wreck an entire economy.

Authenticity
Gold has another feature that’s extremely important for any store of value or currency: authenticity. For millennia, gold has been used as both a currency and as a store of value. It has been prized throughout its history because of its scarcity. Gold has been used in money, in jewelry, in crowns and in palaces. Gold is universally associated with wealth.
Since Bitcoin lacks the thousands of years of history, culture and tradition that impart so much value and mystique to gold, it's easy to write the currency off as inauthentic.
But in a world that's rapidly moving from analog to digital, even a "new" technology like Bitcoin can be authentic. When it comes to digital money, Bitcoin certainly fits the bill. Of the thousands of different tokens that label themselves “digital currency,” Bitcoin is the very first. That grants it an important claim to the property of authenticity.
There are many great altcoins, but none of them were first. None of them can reasonably claim to be the best. None have a higher market capitalization. Bitcoin is the first, has the largest network effect, is the most universally recognized and is authentic.

Asset or currency?
As Bitcoin inches toward mainstream adoption, economists and finance experts debate whether it’s an asset or a currency. In terms of valuing Bitcoin, that argument couldn’t be more irrelevant. It doesn’t matter how people use Bitcoin; what matters is whypeople choose to own it.

Bitcoin’s future
The future of Bitcoin is almost certainly a bright one. Various analysts and traders have tried to guess the value of Bitcoin in the future, with some saying it might even reach $15,000 in the near term.
But forget about the near term. If Bitcoin is digital gold, then its long term value is what really matters. Bitcoin is rare. Bitcoin is scarce. The vast majority of people don’t own even a fraction of one.
What’s Bitcoin’s long-term potential? Bitcoin could easily become so valuable that even millionaires can’t afford an entire coin.