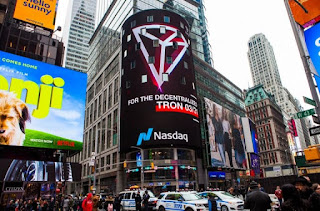 On May 31st, the mainnet will be launched, TRON plans to shed its ERC20 identity and migrate from the Ethereum platform. It will be a serious challenge for ethereum.

The TRON name began circulating among cryptocurrency investors in September 2017. Its token, TRX, quickly became one of the top 20 digital assets by market cap, and by January 2018 TRX had grown more than a hundredfold in value.

TRON's testnet is now live, giving fans and skeptics alike a transparent view of TRON's solid progress. On May 31st, the mainnet will be launched, TRON plans to shed its
ERC20 identity and migrate from the Ethereum platform.

The TRON protocol is one of the world's largest blockchain-based application operating protocols. TRON provides basic-layer public blockchain featuring high-throughput, high-extension, and high-reliability support for the protocol's decentralized application operations.
For the blockchain project, the mainnet is the foundation of all upper-layer architecture. The testnet is TRON's first technical debut and includes completed nodes, basic network functions, transactions, and customizable modules. Once mainnet goes live, TRON will no longer be an ERC20 token and become a true token within the TRON ecosystem.
Ethereum launched in late July 2015 and opened the door to Blockchain 2.0. TRON has had its sights set on creating Blockchain 4.0 since stage one, and maybe one of the biggest challengers Ethereum will face in the near future.

1. Design Concept:
The initial goal of the Ethereum project was to create a smart contract platform that supported Turing-complete applications and could execute automatically according to the agreed logic of the smart contract.
TRON is still committed to creating a decentralized smart contract platform, but with higher throughput, extension, and reliability capabilities than Ethereum.

2. Consensus System:
The blockchain system is a distributed system. Almost all first-generation blockchain projects (e.g. Bitcoin) use PoW consensus systems, but the system has many issues, but it has been improved. DPoS is a new generation of consensus mechanism that is cutting-edge and fits well into the big picture.
Ethereum initially used Ethash, a PoW-based, variant consensus algorithm. Even though they made some improvements on the algorithm, It may trill require a long period of testing.
TRON employs an optimized "Delegated Proof of Stake" ( DPoS) consensus system. The system uses a witness mechanism to achieve decentralization, where delegate nodes are selected by the blockchain network community through voting.
TRON may outperform Ethereum by utilizing a new generation consensus system.

3. Smart Contracts:
Ethereum supports the development of smart contracts via advanced, Turing-complete language, and has already designed such a programming language called Solidity to write smart contracts.
TRON will also have its own TVM with fast loading speeds, resource isolation, and scalability. The TRON protocol is defined completely by Google protobuf and will naturally support multi-language expansion.
Smart contracts refer to contracts signed and operated via computer programs. TRON's smart contract is much more flexible and easy to use than Ethereum's.

Under TRON's excellent consensus system, a limited number of nodes with high computational performance will be selected by users to act as maintenance nodes. Based on official disclosure from TRON, the company's network can dynamically adjust bookkeeper sets based on block generation speeds and delays.
On performance and throughput, TRON wins.

5. Economic Mechanism:
Ethereum uses a leasing model that controls the execution command cap for a certain transaction through Gas. There will be many fees involved with high volatility.
TRON also uses a leasing model but improved on the economic mechanism by supporting free transfers.
TRON wins again.

7. Scalability:
The biggest hindrance for Ethereum to take on more business is scalability.
Compared with Ethereum, TRON has expanded its network almost limitlessly at the beginning of the project by dividing the architecture into different layers: storage, core, and application. The storage layer uses KhaosDB and LevelDB to achieve rapid iterations and upgrades for the public blockchain.

Though Ethereum and TRON have not yet achieved the shard mechanism, it is much more feasible for TRON, who is already making preparations.

8. Applications:
Throughout the years, TRON has accumulated a large number of DApp resources to attract a great number of users. However, due to its limited performance, Ethereum's user experience is mediocre.
TRON's focus isn't solely on basic blockchain technology, but also on the application experience of blockchain products. With the development of its ecosystem, TRON will then turn to support the basic layer of the public blockchain from all aspects.

TRON has achieved impressive progress in just six months. This rapid development and progress should be attributed to TRON's respect for technology and the relentless efforts of TRON's team.

TRON is one of the earliest teams that focused solely on blockchain development. Since the beginning of 2018, the frequency of TRON's code update has been at the forefront of all blockchain projects. At the time of the author's writing, the Github open source library for TRON's project showed that the code's last git push was 9 minutes ago:

When it first arrived on the scene, TRON was a vibrant, energetic, upstart of a company; a great reflection of its millennial founder, Justin Sun. Today, TRON is retaining its fearless energy but adds a much-needed groundedness with the debut of its technology.

TRON has the ultimate goal of creating a "truly decentralized Internet". In just half a year, TRON's team has created a foundational public blockchain that incorporates cutting-edge technology. TRON has shown itself to be a serious contender.