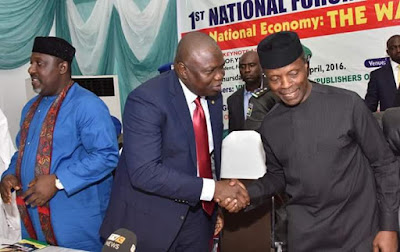 Lagos State Governor, Mr. Akinwunmi Ambode has called on young graduates coming out of the nations’ tertiary institutions to look inwards and develop entrepreneurial skill that will help them generate wealth for themselves and create jobs rather than relying on white collar jobs that may not be forthcoming.

Speaking as the Special Guest of Honour at the 24th Convocation Ceremony of the Lagos State Polytechnic, Ikorodu, on Thursday at the College’s ground, the Governor urged young graduates to accept the reality of the critical economic period that the nation is undergoing, saying the present situation requires new innovations and entrepreneurial skill that would make them a contributor to the growth of the economy rather than relying on paid employment which may never come.

He noted that the high rate of unemployment among qualified Nigerian graduates over the years was an indication that there is an urgent need for economic diversification in which the nation would locally produce large number of goods consumed by the people and import less so as to strengthen the economy.

Ambode, represented by his Deputy, Dr. Idiat Oluranti Adebule, stated that these needs would provide our graduates fresh opportunities to redirect their energy and acquire new innovation and entrepreneurial skill that would help them to be employers of labour, create wealth for themselves and add value to the growth of the nation’s economy.

While congratulating the graduands for their hardwork, perseverance and commitment to academic excellence, he reminded them that graduation itself is not an end, but a basic requirement to getting to an end, imploring them to put into good use the vast training and experiences they have acquired over the years and be ready to contribute to the task of nation building.

The Governor stated that it was in recognition of the emerging trends in the global socioeconomic activities that informed the creation of the Office of Wealth Creation and Employment by his administration, pledging that the State Government would continue to create enabling environment for young entrepreneurs to grow.

According to him, “It is in pursuance of this commitment that this administration had equally established an Employment Trust Fund to which the state government is committed to contributing a total sum of N25 billion in four years meant to address a key challenge of access to soft loan.”

“The  major trust of the fund is to support young people especially youths and fresh graduates with innovative ideas that can be developed into business enterprise, as well as make use of the opportunity by coming out with new ideas that could help them to create jobs and contribute to the growth of the state economy.”

While assuring that his administration would not relent in ensuring the sustenance of academic standards in all state institutions with regular subventions and other interventions, Ambode informed the gathering that his government is already working with a giant technology company in Israel on the possibility of building a High Technology Centre in the College to further strengthen the development of technology related courses in the school.

Earlier in his welcome address, the Rector of the Institution,  Mr. Samuel Oluyinka  Sogunro explained that the Polytechnic, that had been in existence since 1978, is ranked among the best 4 polytechnics in Nigeria and one of the best fifty in Africa because of its high academic standard.

He notified that the school in the recent past participated in the Global Entrepreneurship programme organised by the Technology Incubation Centre in Lagos, in which the school was rated as one of the best in terms of technology and innovations.
Oluyinka disclosed that a total of 8,519 students graduated from the 24th graduation ceremony of the school, promising that the College under his leadership would continue to turn out highly groomed, adequately trained and enterprising graduands that would add value to the economy annually.

The highlight of the ceremony was the presentation of gifts to students who distinguished themselves in their respective areas. One of such is Miss Omosalewa, Babalola Adenike who received the best graduating student award with a cumulative GPA of 4:00 and was given automatic employment by the Polytechnic.
News