Work to Commence on New Mile 12 Market Next Week- Ambode 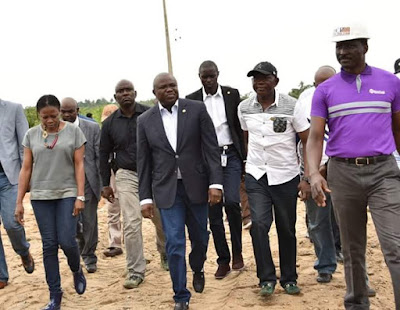 ..Says Eko Rice will be ready in six months
...Assures on delivery Of Agbowa Sawmill by September

Lagos State Governor, Mr. Akinwunmi Ambode on Tuesday inspected the new Imota site, proposed for the relocation of the popular Mile 12 Market, where he assured that work will commence on the site next week.

The Governor who was accompanied on the inspection visit by top officials of the Ministry of Physical Planning and Urban Development and members of the State Executive Council said the relocation of the market became necessary following the recent clash in the area, just as he directed the Ministry to move to site and commence work on the market immediately.

He however expressed optimism that the relocation will drive commerce and
investment into the Imota area, urging residents to gear up to receive the vast number of visitors that will visit  the market.

“So, our new commodities market would take off from here and so I like to give the Ministry of Physical Planning the directive to commence activities here within the next one week. We believe that if we start within the next seven days, within the next six months, Mile 12 Market Ketu will be a thing of the past.

“We are committed to doing this. We know it is in the interest of all Lagosians that we relocate Mile 12 Market. The marketers themselves have agreed; the onus is now on us to ensure that we deliver this new market within the next six months.

“I want to appeal to people in Imota that you will be having new set of investors; new set of traders and then new set of tenants. You should be very accommodating because we are bringing a whole lot here,” he said.

Governor Ambode also assured residents that the State Government will consider the possible expansion of the road network around the market and connecting the Ikorodu and Epe area, saying the relocation of the Mile 12 Market as well as the Oko Baba Sawmill Market to the axis will have multiplier effect on the Lagos economy.

“We are on our way to Agbowa now. We intend to relocate Oko Baba Market in Ebutte Metta to Agbowa and so this axis will be a big axis for commerce, for employment and then for prosperity and that is what we want for the rest of Lagos,” he said.

Governor Ambode who also visited the Imota Rice Processing Factory in Ikorodu Division, assured that the facility will be overhauled and be up and running within the next six months.

“That is the only way we can be clearly said to have intervened seriously and that is the only platform we can use to allow the inflow of rice paddy from Kebbi State. You will all recall that we just signed an MoU with Kebbi State and the intention is that we want a consistent flow of raw materials to come so that the era of importing rice from abroad would become a thing of the past,

He said aside Kebbi State, Lagos was also looking at possible partnership with other states, saying that on the long run, such collaboration will ensure that residents can consume locally processed rice within the next six months.

The Governor said that a process to make the mill private sector driven will commence immediately, adding that a vibrant infrastructure that will attract the best professionals and experts to manage the facility would be put in place.

“This is a major investment and we cannot allow it to rot away. So in the next three to six months, when we come back here, we must be eating Eko Rice,” he said.

The Governor who also visited the new site for the relocation of the Oko Baba Sawmill Market commended the contractor for the work done so far, assuring that project will be delivered before the end of September 2016.

He said the project will ensure that the Ebute Metta - Third Mainland Bridge loop which is currently an eyesore will be cleaned up, saying that the traders are excited and looking forward to moving to the new site.

A lawmaker representing Ikorodu Constituency II at the Lagos State House of Assembly, Nurudeen Saka-Solaja, expressed gratitude to the Governor for the proposed relocation of the Mile 12 Market to Imota, just as he urged the government to commence the project in earnest.

Also speaking, the Ranodu of Imota, Oba Adeniyi Agoro, thanked Governor Ambode for considering the area for such laudable projects, assuring that the residents will cooperate with the government to ensure the success of the projects.
News