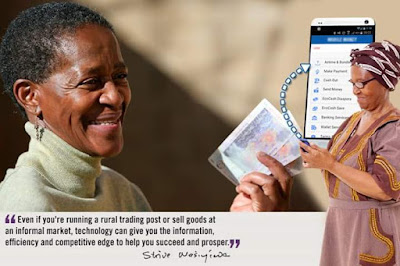 __A group of people who know and trust each other get together and they form a savings club. They agree to save a certain amount of money every month and each one of them takes turns to receive a large amount of money. It’s a traditional savings and loan idea that’s been around for a very, very long time.

Women in informal markets, in villages, in church groups, do it. Low income workers do it, right across Africa.

People who have tried to estimate how much money circulates in these informal savings schemes believe it’s probably billions of dollars across Africa.


About three years ago, I brought together a small team of smart "coders" and asked them to design a mobile "App" to "re-imagine" this system. The team developed a platform which enabled a group of people to use their "mobile money" service to save their money using this platform, using their phone number as a bank account. We’ve now successfully implemented this idea, and thousands of Savings Clubs are now using it.

The "EcoCash Mukando" platform does not try to do away with this traditional system, but has simply applied technology to make it more efficient and flexible:

# it holds the deposits on behalf of the savings clubs, and what are known as "burial societies."

# they can earn interest on their money, which they could not do before.

# it's easier and safer to deposit and move their money.

Since the service was launched in Zimbabwe a few months ago, I have been amazed at how many clubs exist, as each week hundreds of new clubs are joining, and being formed.

Now that we have got the concept working, and generating revenue, our next task is to begin to roll it out in other countries.

A few weeks ago I was having a meeting with a leading international banker in New York, when he suddenly said to me, “Tell me about this banking system your people in Zimbabwe have pioneered. You call it Mukando; what an amazing idea. You guys could mobilize billions in savings!"

I simply smiled, and thought to myself, "Here is a guy in New York, watching something we are doing in Africa."

I have no doubt in my mind that this is a billion dollar idea.

I have used this example to illustrate a very important point to you:

Some of the greatest opportunities out there do not necessarily involve new inventions or innovations. You can start by observing things around you, some of them basic mundane things. Some of these things are taken for granted, as "the way things are done," but everything that you can see with your physical eyes, is "subject to change."

Why can't you be the person who brings this change by applying a technological innovation to it...

Here’s my challenge: Think about the most mundane activity around you, and "re-imagine it" for the DIGITAL AGE. If you succeed, you'll be on your way to becoming a billionaire.

One last point: many people tell me they have lots of ideas, but the mobile operators in their country are not willing to partner with them. As much as I'm in this business, let me tell you something: you don't need them!

Uber, WhatsApp, Twitter, Viber, WeChat, Instagram, Alibaba… none of them went begging mobile operators to partner with them.  They just did it.

Come up with strategies that bypass the need to get anyone's approval or permission, including mine!

You could be the one who changes the world with an idea all others thought impossible. Don’t get left behind.