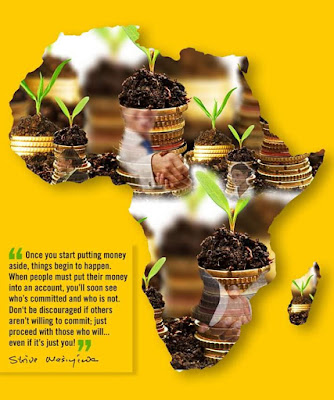 __Maybe it was "esusu," "stokvel," and "mukando" that got me into business after all!

In my last post I talked about a traditional savings scheme practiced across Africa. It’s easily the largest savings bank on the African continent, holding billions of dollars with operations in every single country in Africa (each one with its own brand name), and a branch network that goes right down to the village level! Well, it's more than a single bank, it is more of a system.

I talked in my post about how technology could be applied to this amazing informal system to make it more efficient, modern and secure. I imagined that African entrepreneurs (including myself) will soon create a multibillion dollar industry around it. The mobile phone and the Internet are the key tools to making this happen.

Which reminds me, did I tell you that this is really how I raised my first capital to go into business?

When I returned to my home country Zimbabwe, soon after its independence, I got a job with the state-owned telephone company as an engineer. In those days there were no mobile telephone companies. Almost every day after work, I used to stop at a local hotel for drinks with some of my mates before catching the bus to go home. I did not own a car in those days, and I used the public bus system to get to and from work.

My friends and I would often discuss different business ideas which could help us generate more cash for ourselves. I personally wanted to save up to buy or build a house one day, and get married.  I soon realised that these discussions always ended up as nothing more than just talk, so I determined to put some form and structure to it:

__"Why don't we start a savings club in which we all pledge to set aside a portion of our salaries?" I suggested to more than 10 people gathered around the bar.

"What will we do with the money?" someone asked.

"Well, we can develop projects in which we invest?" I suggested.

"We can start a disco. The one here is lousy!"

Almost everybody thought it was a good idea, and I was chosen as the coordinator. I also suggested that next time we meet at a more serious venue, rather than a pub. I suggested the home of an uncle of mine, and we set a date for that weekend.  On the Saturday morning set for the meeting, only three of my friends pitched up! I suggested we start anyway, and we agreed to each set aside every month what would have been the equivalent of $75.

At the end of the month, only two of us actually put in any money. Two others who promised to put in money continued to attend meetings for a month or two, but then we kicked them out after it became obvious they were never going to put in any money.

__Once I put in the first $75, I became a very serious individual. I never entered a pub again... The rest is history, as they say!

Here are some things to take away:

# I really started with $75, as a member of a failed savings scheme of young professionals.

# It's great to get together with your friends to start a business, but don't allow it to just become pub talk. Put some action plans together.

# Once you start putting money aside, things begin to happen.

# When people must put their money into an account, you’ll soon see who’s committed and who is not.

# Don't be discouraged if others aren’t willing to commit; just proceed with those who will... even if it’s just you!

# Even if you haven’t yet decided what you’re going to do, start saving, even if it’s very little. It's not reasonable to imagine you’ll be able to borrow money, and start a business, without putting in anything yourself, however small.

Today, you can raise money for small ventures on the Internet using much more sophisticated schemes such as "crowding sourcing." My daughter and her friends used a similar scheme when they were at university to raise money for a social venture. Whilst you must exercise caution when participating in such schemes (as many are scams) you must still have the intellectual curiosity to study them carefully, and understand how they work.

(Please don't inundate me with requests for information on this one, because I'm a little too old to get into it. Those of you who are determined will no doubt figure it all out). Here’s one place to get started in your research about what’s out there: http://crowdfundbeat.com/2015/04/05/2015-list-of-crowdfunding-websites/

One more thing -- I never condemned anyone who didn’t join me. I found ways to keep the relationships with them. Some of my friends who participated in those first meetings also went on to establish themselves as entrepreneurs, and often speak of how they had been inspired by my commitment in those early days.