E-Dinar Coin Rate Growth on coingecko.com Is Observed For 24 Hours With Market Capitalization of More Than $ 4.5 Million 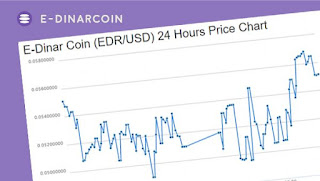 As can be evidenced by the graph, there is an active increase in the growth rate of the cryptocurrency in the last 24 hours. The reason for this dynamic growth, in general, was a significant demand for highly liquid altcoins, among which E-Dinar Coin and Ethereum stand out most. In the last 7 days, E-Dinar Coin has maintained a stable rate.

Despite the steady growth of Bitcoin, its positions are mixed due to the disputes between Bitcoin Core and Bitcoin Unlimited, which is why the very first cryptocurrency in the world reached low values  in its volume ~ only 67%.

We would like to remind you that the E-Dinar Coin trading volume is $160,751.0  on  coingecko.com  and is rapidly increasing. According to analysts, in 2017, the rate of the cryptocurrency has all the tendencies to an uptrend against the backdrop of sharp fluctuations in the rates of other financial currencies and cryptocurrencies, and at the moment the most profitable investment in E-Dinar Coin is possible.