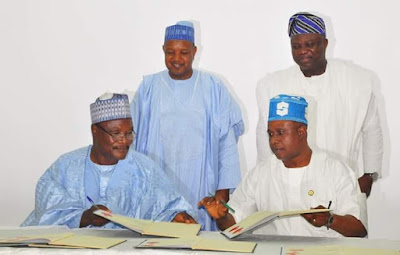 In line with the persistent calls for a paradigm shift from over dependence on oil as the major earner of the country, the Lagos State Government and Kebbi State on Wednesday entered into a partnership on the establishment of a commodity value chain that will give a quantum leap to food processing, production and distribution.

The partnership is aimed at bringing about national food sufficiency and food security, as well as creating employment and wealth distribution for the benefit of both states and the nation in general.

Speaking at the official signing of a Memorandum of Understanding (MoU) between the two states held at the Banquet Hall, Lagos House, Ikeja, Governor Akinwunmi Ambode said the partnership signaled the commencement of a new beginning of cooperation and common-sense revolution, which is line with the change mantra of All Progressives Congress (APC) that calls for patriotism in all facets of life.

Governor Ambode, who said the partnership would bring an end to the era of imported rice in the country, noted that there was no doubt about the economic prowess of the country to produce rice locally.

“This is the first time in the history of Nigeria that two States are collaborating to develop their agricultural potentials. We have the economic prowess to produce rice locally. The era of imported rice is gone. The reality is for all of us to embrace the consumption of local foodstuff and commodities,” he said.

The Governor acknowledged the fact that the future of Lagos is partly tied to deliberate resolution on food security, and that food production and self-sufficiency required immediate attention at policy and strategic levels to sustain the country, hence the need for the partnership.

“Lagos State is the largest consumer of food commodities in Nigeria by virtue of our State population. We have the market, with the required purchasing power also. Lagos State has an estimated consumption of over 798,000 metric tonnes of milled Rice per year which is equivalent to 15.96 million of 50kg bags, with a value of N135 billion per annum,” he said.

In addition to rice, Governor Ambode said Lagos is presently consuming 6,000 herds of cattle daily which may increase to 8,000 in the next 5 years, adding that the bulk of vegetables produced in the country eventually end up in the Lagos markets.

He added: “Lagos State is one of the largest producers of poultry and thus has a large demand for maize for livestock feed production. The State also houses most of the industrial users of wheat and sorghum; mostly flour mills, bakeries, breweries and food manufacturers.

“Kebbi State, on the other hand, is blessed with a vast arable land suitable for the cultivation of Rice, Wheat, Ground nut, Maize, Sorghum and Sugar cane.

“It is an agrarian State with over 1.2 million hectares of arable land characterised by very large floodplains, lowland swamps and gentle slopes. In the 2014 / 2015 wet season, over 600,000 Hectares of land was deployed for Rice cultivation in the three senatorial areas of the State.

“The people are traditionally Rice farmers with average land holding of about 10 Hectares. Presently, Kebbi has over 50,000 metric tonnes of paddy in store produced from the last 2 planting seasons.

“With these considerations in mind, Lagos State and Kebbi State have decided to collaborate and exploit our areas of comparative advantage to create value for both States. This alliance will ensure Food Security, job creation, increase in farmers’ income and the overall improvement in the living conditions of the residents of both states through wealth creation and poverty reduction.

“This collaboration is in line with the clarion call and policy direction given by the President, Muhammadu Buhari, on the need to feed ourselves,” Governor Ambode stated.

The joint venture between the two states, Governor Ambode explained, will be implemented using a Special Purpose Vehicle known as LASKEB Agricultural Production and Marketing Company (LAPMCO), adding that the major areas of focus will be the development of commodity value chains with emphasis on Rice, Wheat, Ground Nut, Onions, Maize/Sorghum and Beef.

Speaking further on the agreement, Governor Ambode said: “The numerous thousands of our market women and men can become key employers of labour as distributors of ‘Ibile Rice’. We can also brand and package rice in the names of our distributors and market women. As a State, we shall adopt our local rice as a State dish in all ramifications.

“The special purpose vehicle will allow the entrance of private sector investors and other states in expanding the rice mill at Imota, Ikorodu and other locations. We have already designated the 100 hectare land at Imota as the Agric Park in the State. Other locations in and outside the State will be vigorously activated to fulfill our mission in record time.”

Also speaking at the event, which was attended by top government functionaries, traditional rulers and members of the Organised Private Sector (OPS) from both states, Kebbi State Governor, Alhaji Atiku Bagudu thanked Governor Ambode for providing leadership and innovation that brought about the partnership, adding that same was in line with the effort of President Buhari and Vice President Yemi Osinbajo to restructure Nigeria away from over dependence on oil.

Governor Bagudu said in the world of genetically modified food, the partnership between Lagos and Kebbi was an additional motivation to provide certainties for the people in terms of food production and sufficiency, and that the goal is to produce 60 to 70 percent of Nigeria’s Rice needs, and replicate same in other food items.

He said the agreement had the broadest public acceptance in Kebbi State, and that the people, especially farmers in the state, are delighted to partner with Lagos, which he described as the most entrepreneurial part of Nigeria.

He said Lagos and Kebbi have had a long history of trade, and that the signing of the MoU was a further way of cementing the relationship with the view to make the people to get richer.

“Lagos is the most entrepreneurial part of Nigeria. Lagos, if it were a country on itself, is a country that other states will be going to establish a relationship and so why not state to state. So, what we are doing is that we are pioneering a collaboration that will bring other states on board later and we believe that our potentials is enormous and we must have pacesetters to start that process of joint collaboration for our collective good,” Governor Bagudu said.
Lagos State Government News