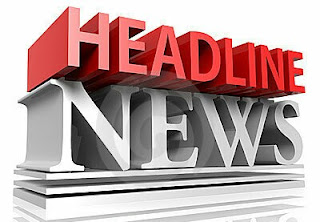 Good morning and have a splendid weekend..4/03/2016
Headline News