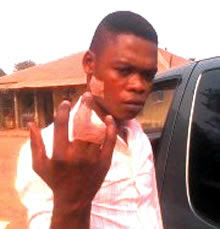 A Chinese worker, identified as Njaga Chang, has cut off one of the right fingers of his Nigerian colleague at the Xin Xin Quarry in Akamkpa Local Government Area of Cross River State.

The 23-year-old Nigerian victim, Nsikak Tommy, was said to have incurred the wrath of the Chinese for failing to quickly turn on the generator at the quarry site.

Chang was said to have initially attacked Tommy with a water hose but later resorted to the use of
machete when the victim took to his heels.

Narrating the incident to Southern City News on Sunday, an eyewitness, Ene Bassey, said the
Chinese was quickly taken away to an unknown destination in Calabar after the incident happened.

“THE INCIDENT HAPPENED AT ABOUT 4.30 PM ON SATURDAY. THE CHINESE MAN WAS ANGERED BY THE NIGERIAN’S SLOW RESPONSE WHEN HE WAS TOLD TO TURN ON A GENERATOR AT THE QUARRY. CHANG HAD INITIALLY STARTED WITH INSULTS ON THE NIGERIAN, BUT LATER ATTACKED NSIKAK TOMMY WITH A WATER HOSE.

BUT AS TOMMY TRIED TO ESCAPE FROM THE ASSAULT, CHANG CHASED HIM WITH A MACHETE. HE FIRST DEFLATED THE TYRES OF TOMMY’S MOTORCYCLE TO PREVENT HIM FROM FLEEING AND TRIED TO CUT HIS HEAD. INSTINCTIVELY, TOMMY RAISED HIS HAND TO BLOCK THE CUT AIMED AT HIS HEAD. IN THE PROCESS, THE MACHETE CUT OFF ONE OF HIS FINGERS. HE WAS LEFT IN A POOL OF BLOOD AS HE CRIED FOR HELP.

AFTER THE INCIDENT, OWNERS OF THE XIN XIN QUARRY, WHO ALSO OWN TWO OTHER QUARRIES IN AKAMKPA KNOWN AS EXPANDED AND FUGHOU QUARRIES, RATHER THAN ATTEND TO THE INJURED MAN, FERRIED THE CHINESE MAN TO CALABAR AND HAD HIM HIDDEN.

IT WAS TOMMY’S FELLOW NIGERIAN WORKERS AT THE QUARRY THAT MANAGED TO TAKE HIM FOR TREATMENT AT THE BAKOR MEDICAL CENTRE IN CALABAR,” BASSEY SAID.

Southern City News learnt that the police in Akamkpa arrested and later released Chang on bail.

Confirming the arrest, the state Police Public Relations Officer, Mr. John Eluu, said he got confirmation from the Divisional Police Officer in charge of the Akamkpa division that Chang was arrested but released on bail after they had agreed to settle the matter.

Eluu said, “Yes, I got confirmation from the DPO that the Chinese national was arrested and taken to Akamkpa, but was later released on bail. They agreed to settle the matter amicably amongst themselves.”