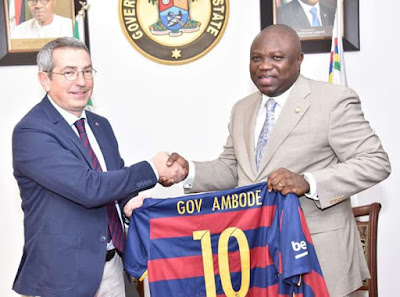 …Lagos Marathon, One Of The Best In The World, Says NFF President

Lagos State Governor, Mr. Akinwunmi Ambode on Monday welcomed the decision of Barcelona Football Club (FC) of Spain to establish its first Football Academy in Africa in Lagos, just as he pledged the maximum support of the government in ensuring the successful take off of the project.

Governor Ambode, who spoke at the Lagos House in Ikeja while receiving senior management staff of the football club, said he was delighted with the development, as it was in sync with his administration’s philosophy for sports development.

The Governor, who described the development as an historic moment for the state, said it was indeed a thing of joy coming at a time when the state was still basking in the euphoria of the successful hosting of the International Marathon.

He said the Lagos Marathon was a major pointer to how Lagos could actualize its dream of improving the Gross Domestic Product (GDP) of the state using sports as a major instrument.

According to Governor Ambode, “this visit by FC Barcelona is coming at a point where I believe strongly that we have nothing else to say than to say we are committed into this partnership because we know the partnership will give us the first FCBEscola in Africa. I was made to understand that this is the first of its kind in Africa and so Lagos is priding itself as a major receptor of the next academy to be established in Africa. 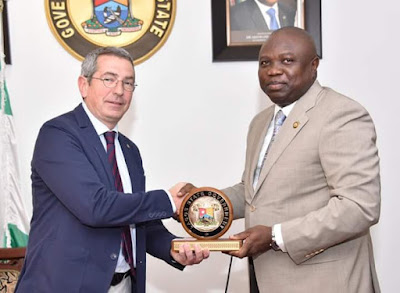 “I know that this will create a very good platform for youth development, grassroots empowerment and also for the value of sportsmanship. We share the same values with FC Barcelona which are respect, courage, humility, social integration and community service.

“So, I just want to say that you have our blessing; you have our go ahead. Whatever it is that we need to do to ensure that this project take off as quick as possible as a government, we are hundred percent ready to support you in the interest of all of us,” the Governor pledged.

The Governor, who reiterated the importance of sports to integration and development, said that sport was the future of service to create a platform for youth employment and youth engagement in Lagos.

“I believe so much that sports, entertainment and arts can actually contribute together to lift Lagos and Nigeria away from the problem of unemployment and that is why this government will continue to support sports in its ramifications and ensure that we take our youth off the street and make them productively engaged,” Governor Ambode said.

Besides, the Governor pledged the full support of the state government to the Nigeria Football Federation (NFF) in hosting the first ever Beach Soccer African Nations Cup in Lagos, which will hold between December 10 and 23, 2016.

Earlier, Pau Vilanova i Vila-Abadal, Director of Business and Member of FC Barcelona Management Board, who led the team to the State House, thanked Governor Ambode for the support given to them so far in actualizing the project.

He said FC Barcelona decided to establish its Academy in Lagos due to the impressive population of the state, and the opportunity to share the philosophy of the team with the state.

On his part, Oscar Grau, Worldwide Director of Barcelona Academy, said it was indeed a big honour for the club to establish its Academy in Lagos, as many of the big names in the team started from such Academy.

He said players like Messi, Iniesta, Sergio Busquet, Pique, among others, all started from such Academy, and that the club has a unique methodology of instilling great virtues in footballers, apart from footballing skills and education.

He added that through the Academy, the club also aims to raise excellent players for Nigeria, and that the core values of the club included efforts, team work, humility and respect.

Also speaking, NFF President, Amaju Pinnick congratulated Governor Ambode over the successful hosting of the Lagos International Marathon, saying it was one of the most successful tournaments in the world.

He pledged the support of the Federation to ensure the success of the Academy, especially in terms of facilitating the necessary approvals needed for expeditious take off of the project.

He added that Lagos, under Governor Ambode and his predecessors, had always been a major destination for sports, and that the Confederation of African Football (CAF) had just approved the hosting of the first ever Beach Soccer African Nations Cup in Lagos in December.

“The tournament is a major qualifier for the World Cup and eight best Beach soccer teams in Africa will converge in Lagos for the tournament and we know that Lagos has always played a pivotal role in redefining and rebranding Nigeria, which we are very excited about,” Pinnick said.