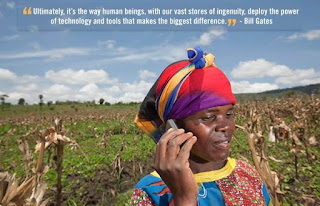 __Soon it will be Africa’s turn to help feed the world...

This week an American journal called Foreign Affairs has released an excellent collection of essays entitled: “African Farmers in the Digital Age: how digital solutions can enable rural development.”

In this new report, 20 African and global experts discuss ways to transform African agriculture, with a focus on food systems and rural smallholder farmers. A quick summary of a few priorities to speed up change:


__Most important of all is… wider access to valuable information, which is why I’m telling you about this new report right away!

The report is 141 pages long so I'll share just one excerpt written by Bill Gates (founder of Microsoft) which first appeared in this special edition (February 2016):

“. . .Right now, hundreds of millions of Africans rely on farming for a living, but they don’t grow as much—and they don’t sell as much of their surplus—as they could. As a result, Africa had to import $40 billion worth of food last year. Something is not functioning properly when half of the continent’s labor produces food, and the continent still buys its food from somewhere else!

So what is going wrong? Why aren’t African smallholders tapping into that $40 billion market? The main problem stems from the fact that agricultural markets, like banks, exist on a formal plane, whereas smallholders exist on an informal one. So farmers and markets cannot communicate effectively. Smallholders don’t know what the market will pay. They can’t grow crops according to the market’s specifications because they don’t know the specifications. They have no way to learn the farm-management practices that would let them double or even triple their yields. Instead, they grow mostly what they can eat or trade locally, the way they’ve always grown it.

As long as this information disconnect exists, there will be a related physical disconnect. The rails and roads that would take crops from the farm gate to the market don’t exist, because the market doesn’t want the crops the farmers are growing in the ways and volumes they’re growing them. So farmers are isolated, stuck with no money and no voice that the marketplace can hear.

But digital technology can act almost like a secret decoder ring that links the formal and informal sectors. Smallholders are already using mobile phones to communicate within their networks, to talk to family and friends. The institutions that make up the formal marketplace communicate in much the same way. So it is now possible to generate a two-way conversation between Africa’s producers and Africa’s consumers—and this is an entirely new conversation. Each party will be able to express its needs to the other for the first time ever.

Imagine a smallholder farmer who can discover, easily, that yams are expected to fetch a high price this year. She can also contact a local cooperative to combine her yams with those of her neighbor, satisfying the buyers’ volume requirements. Because she is assured of sale at harvest, she can afford to take out a loan, using her phone, to buy fertilizer or better storage or whatever else she needs to maximize her yield. In the meantime, instead of waiting for a visit from an extension worker who may or may not know about yams and the soil in this particular region, she can get advice tailored by crop and soil type via digital video or text.

When information can flow easily, when data is democratized, the cost of doing business in agriculture goes way down, just as transaction costs go way down when financial transactions are digital. The excessive time and money farmers, agribusinesses, and cooperatives spend managing the risk of doing business with unknown partners is a drag on efficiency. When these partners can know each other easily—can function as nodes in a single marketplace—agriculture will thrive.

It’s not as easy as the above paragraphs may make it seem. Building a digital agriculture system that actually accomplishes these goals will take innovation and investment. But the point is that before it wasn’t possible, and now it is. The added variable of digital technology has changed the
agricultural development equation. . .”

You can view and download (free of charge) the full Foreign Affairs special edition on agriculture here: http://fam.ag/20JyIQm