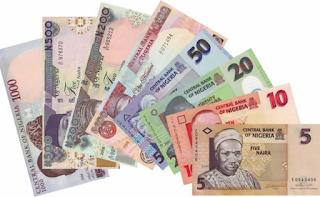 The naira will weaken further at the parallel market this week after shedding nine per cent of its value last week, foreign exchange dealers and economic experts have said.

Last week, the local currency fell from 310 to 338 as acute shortage of the greenback lingered.

The CBN has left the official exchange rate unchanged at N197 to the dollar on its official interbank window.

Forex dealers and experts expect the naira to fall further at the parallel market this week as demand for the greenback continues to soar.

“The situation has got to the point of hysteria now; everybody wants to hold dollars. So the demand is rising and piling up,” the Chief Executive Officer, Cowry Asset Management Limited, Mr. Johnson Chukwu, said.

The local currency hit a record low of 338 to the dollar on Thursday as desperate importers scrambled for dollars to meet their obligations overseas.

Tumbling global oil prices have battered Nigeria’s oil-dependent economy, with external reserves down to an 11-year low at $27.89bn on February 9, Reuters reported.

President Muhammadu Buhari is concerned that further depreciation will hurt poor Nigerians, but the CBN’s refusal to revise the pegged exchange rate has widened a chasm between official rate and the parallel market.

In January, the central bank halted dollar sales to the BDC operators and allowed commercial banks to accept dollar deposits, in a failed effort to shore up dwindling foreign reserves.

Around 90 per cent of the nation’s foreign exchange earnings come from crude oil exports, but mismanagement of the refineries means the country must also import expensive refined fuel.

The Managing Director, Financial Derivatives Company Limited, Mr. Bismarck Rewane, said it was high time the CBN came up with a forex policy to address the forex crisis confronting the nation.

In an economic note released on Thursday, Rewane said, “Nigerians are perplexed at the endless slide of their currency, which is now trading at the lowest points ever.

“This is happening even when the oil price is up at $31pb. The debate as whether to devalue the naira is not the real issue. The discourse should be whether we need an exchange rate policy or not. The absence of a policy is a recipe for economic anarchy and a race to the bottom.”

According to Chukwu of Cowry Asset, the CBN needs to address the forex crisis before it gets too late.