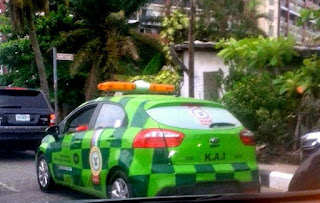 Jimoh, a retired Chief Superintendent of Police, was on Wednesday sworn in as the Marshal General by the State Commissioner for the Environment, Dr. Babatunde Adejare on behalf of the Governor. Before his appointment, Jimoh had served as the Divisional Police Officer (DPO) Alausa and Anthony Police stations as well as in various capacities in the Nigeria Police Force before he retired from the force.

The new KAI Marshal has a Bachelor of Science Degree in Peace and Conflict Resolution from National Open University of Nigeria and an advanced Diploma
Certificate in Security from University of Lagos. Jimoh, who is the fourth KAI Marshal General, succeeds Captain Danjuma Maigari (Rtd).