Bitcoin Price Breaks $1,215 Due to Rapid Mainstream Adoption in Japan 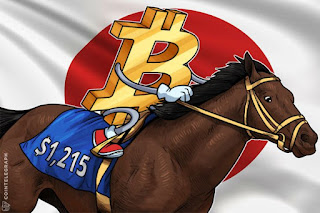 Over the past two days, Bitcoin price stabilized at $1,215 primarily due to the increasing adoption of Bitcoin in Japan.

On April 1, the Bitcoin legalization bill drafted by the Japanese government’s Financial System Council was taken into full effect, officially recognizing Bitcoin as a legal payment method. As a result,businesses began to integrate Bitcoin paymentsand offer the digital currency as an option to consumers.

Most notably, one of Japan’s largest electronics retailer chain Bic Camera announced its partnership with leading Bitcoin exchange bitFlyer to allow their customers nationwide to purchase electronics in Bitcoin.

Bic Camera’s acceptance of Bitcoin and generally positive media coverage on the digital currency spurred the demand for Bitcoin amongst traders and investors. This rising demand for Bitcoin pushed the Japanese exchange volume further, establishing Japan as the most dominant Bitcoin exchange market as of current.

The Japanese exchange market controls over 43 percent of the global Bitcoin exchange market. This essentially means that the market share or the trading volume of the Japanese market is larger than that of the US, Europe and China combined.

For the foreseeable future, SegWit will most likely enjoy its current momentum and continue its path toward activation as the market favorite. According to various sources, including Coin Dance, 70 percent of the Bitcoin industry’s businesses and companies are in support of the activation of SegWit.

The Bitcoin scaling debate is an important discussion to follow for short and mid-term price prediction. While certain events and factors such as the Japanese industry’s explosive growth are pushing Bitcoin price above the $1,200 margin, analysts explain that for Bitcoin price to achieve new highs in the range of $2,000 to $3,000, a scaling solution must be set in place.

If the Japanese Bitcoin exchange market and industry continue to outperform others and maintain their momentum, it is likely that Bitcoin price will remain relatively stable at around $1,200 for the near future.