Britain’s Chancellor Says FinTech is the next Industrial Revolution 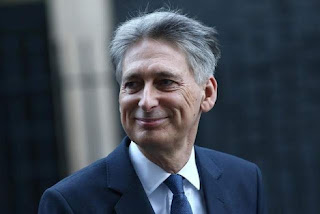 Fintech will change the way people do business and how they access their money, according to Philip Hammond, Chancellor of the Exchequer.

While speaking at an inaugural International Fintech Conference in London, Hammond said that FinTech had the opportunity to fundamentally transform the structure of the world economy and how we live our day-to-day lives.

FinTech will transform the way we live and do business. Whether it is cashless transactions between friends, sending remittances to family in other countries or apps that automatically invest savings at the best rates, FinTech provides
consumers with better services, more choice, and lower costs.

After a trip to India and witnessing the benefits the industry can provide, Hammond believes that the fintech sector has the opportunity to further expand on its services.

It has the potential to transform financial inclusion across the developing world too with more than a billion people now biometrically enrolled in that country and 220 million new bank accounts opened in the last 18 months alone.

Importantly, though, while London remains the number one fintech spot, Hammond is clear that it can’t remain number one by simply sitting ‘on our laurels.’ Even though the fintech sector in the U.K. generated nearly £7 billion in revenue last year, according to Hammond, it’s vital that the country reaches out to other businesses and countries to ensure a strong sector that continues to grow. It has already established connections with several countries.

As well as the Financial Conduct Authority’s (FCA) regulatory sandbox and the Bank of England’s FinTech Accelerator, the British government is doing its part to boost the sector.

In Hammond’s speech, he makes note of the fact that over the last 12 months, the government has delivered £400 million of new capital to the British Business Bank in addition to funding a series of initiatives worth around £750 million to improve the fintech sector for the future.

While these are steps in the industry’s improvement, more needs to be done.

Once Britain leaves the European Union in 2019, Hammond states that the country will need to work hard to seize opportunities and make the most of them. This, he says, can only be achieved by maintaining and enhancing the U.K.’s reputation as one of the best places to establish a business.

While we need to continue to attract the brightest and the best from around the world to these shores, we must also do better at nurturing and developing the home-grown talent to drive our economy forward in the future.